…and he strikes me as someone who would question why the future hasn’t happened yet. It’s a signature Ray Bradbury narrative – always bringing his level of thought energy to a new height. Every time I go back to Bradbury’s work, I find myself not only fascinated by his story telling abilities but also intrigued by the fact that he was as perceptive as he was an astute observer of time. His short stories and sci-fi books, written in the 1930s and 1940s, were rife with futuristic ideas –  terraforming Mars, space travel, robotic cars, intelligent machines, etc. The magic of Ray Bradbury was that it’s almost as if he could take a story that wasn’t thought of and pretended it into existence, at least with his writings.

Although he didn’t have any scientific background, Ray greatly admired and appreciated scientific progress. No wonder he started writing about space travel and Mars when he was only 12! Unfortunately, not everyone shared his enthusiasm. In high school, everyone kept asking him why he loved science fiction so much and why he cared about rocket ships, space and the future. The idea that someday humans could reach Mars was beyond their comprehension I guess. His belief that the space age is already upon us (and that we need to pay attention to it) was met with skepticism even among the NASA community. Then, in 1957, Sputnik 1 (first ever man made satellite) was launched by the Soviet Union. It shocked the world and the US. Ray had a sweet revenge with his response:  “I am not a humble person. I go around saying I told you so to everyone I meet.” Weird flex, but O.K. :). For some reason, I feel like he was waiting for the right moment to say that. To him, it was a failure of imagination and a failure of will. And when the White House started calling him, he not only declined the invite but trolled LBJ and told him he was fired. Holy defiance…that chutzpah! Bradbury simply stopped being bothered by those who didn’t bother to explore the future. Brings to mind this Taleb’s line: “Being reviewed or assessed by others matters if and only if one is subjected to the judgment by future –not just present — others.”

How come we’re looking at our shoes instead of at the great nebula in Orion? Where did we mislay the moon and back off from Mars? The problem is, of course, our politicians, men who have no romance in their hearts or dreams in their heads…..We need space for reasons we have not as yet discovered, and I don’t mean Tupperware.

But of course after NASA had their oh-shit moment, they immediately went to work and within a short period of time, Viking 1 landed on Mars. And when first Mars landing photographs came in, one of the journalists asked Ray how he felt now that first photo is in and there is no life on Mars. His reply was very bradbury-like to say the least: “There is life on Mars, and it is us — extensions of our eyes in all directions, extensions of our mind, extensions of our heart and soul have touched Mars today“. In his mind (paraphrasing), we are the ones who crossed the wilderness of sea, to get here (land). And we are the people who crossed the wilderness of grass and nailed it down to stay here. So, we are the people who are moving toward the wilderness of stars right now in order to live forever…i.e if earth dies, we need a back up planet.

…and when asked what’d happen if we did make a contact with an alien civilization, his response was as poetic and philosophical as it can get – “Simply by arriving maybe they will teach us that we are five billion people with a single (same) skin around us – and if they teach us only that, then the encounter will be worth everything. I think we will burst apart with pride at being part of this universal experience“. It’s a powerful and stunning admission that us humans don’t always know how to live in peace and harmony – and that it takes an ‘out of the world’ event (and aliens) to show us what’s more important. Maybe that will save us from ourselves or at least the thought of it will prevent the world from going crazy. And maybe, just maybe, when they arrive in their spaceships, we will welcome them by blasting Hans Zimmer’s interstellar soundtrack in a ‘its-not-a-war-but-a-symphony’ kind of way – music is a universal language of love after all.

…and the show musk go on!

Nearly seventy years after Ray Bradbury first published his stories, Elon Musk is now carrying his torch forward. Ray imagined voyages to Mars, Elon’s SpaceX is making that a reality. Ray wrote stories about robotics cars, Elon has that going with Tesla (self driving). Ray feared the rise of intelligent machines (storyline: inhuman voices originating from telephone lines creating havoc), Elon founded OpenAI (research) to ensure AI does not do more harm than good. Maybe I am reading into it a bit much, but even the rockets pictured in Bradbury’s book and SpaceX’s actual Starship look strikingly similar. What a trip. Talk about warping time and space! 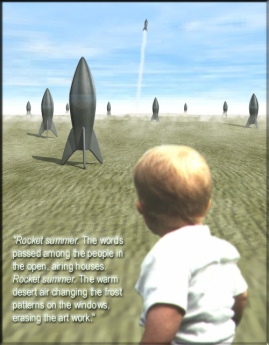 I mean…any sufficiently futuristic Bradbury-story is indistinguishable from modern day reality, no?

Ray Bradbury took us to the future with his imagination, now Elon Musk is bringing back that future to us with his determination. Its not much of a stretch to guess that there is a non-zero chance that the next generation will have a legit shot at actually walking on the moon, and someday on Mars. Given how things are going here on mother Earth, Bradbury’s plea to fly us to the Mars to keep human species and our civilization alive is becoming more and more urgent, it seems. Fifty years ago today, Apollo 11 landed on the surface of the moon for the first time. Perhaps, in the next fifty years we hope we can say the same with Mars? (Elon, hurry up please!).